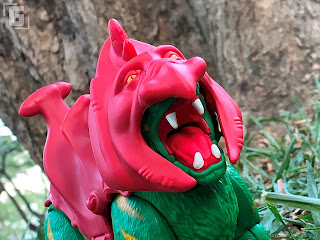 Battle Cat’s portrayal in the minicomics wasn’t emphasized, but some of the elements came together from this medium and the one published by DC Comics. This was then inspired by the Filmation writers adding more elements to the character. In the original minicomics, Battle Cat’s origin was being a savaged animal being called upon by He-Man prior to the transformation in the Cavern of Power.

It also indicates Cringer did not exist prior to the Filmation series the same way Prince Adam did. But the elements were put together when the mythology was slowly being streamlined and introduced some major changes from the minicomics.

The minicomics was just there to explain the mythology as the MOTU toyline was only produced to be sold without a true backed story origin. It was by Filmation series that really fleshed out the definitive origin of Cringer becoming the friend and companion of Adam that retold how they met in the episode “Battle Cat” as a young boy traveling in the jungles and rescuing injured tiger cub that would become what everyone now known as He-Man’s Fighting Tiger. 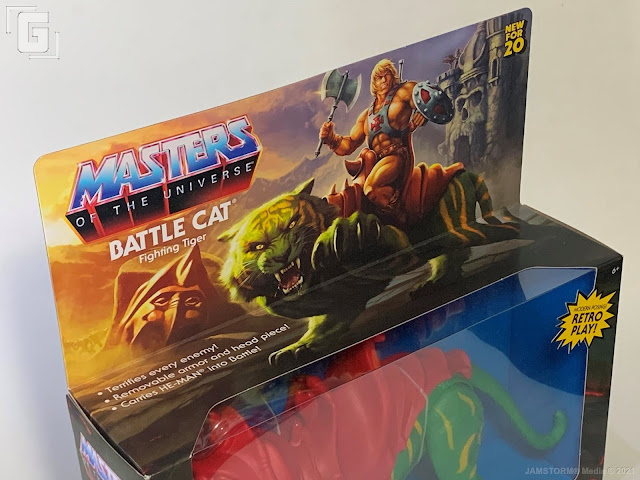 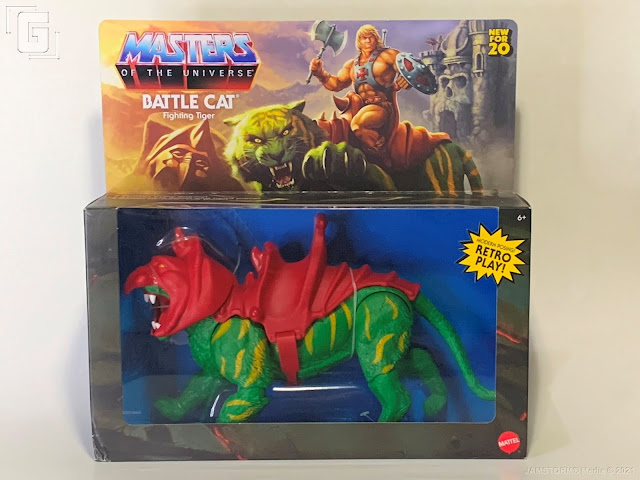 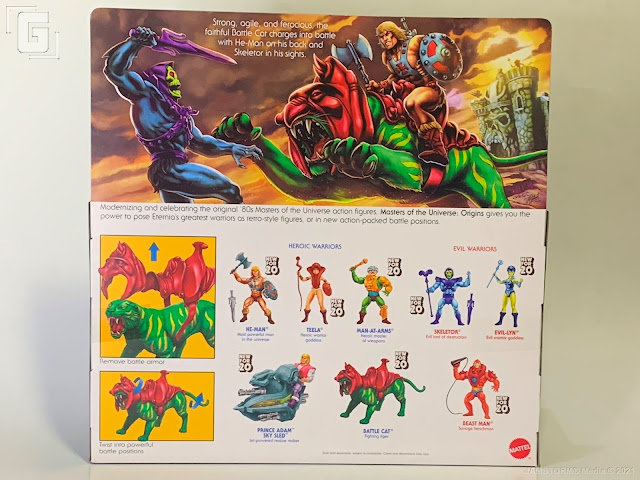 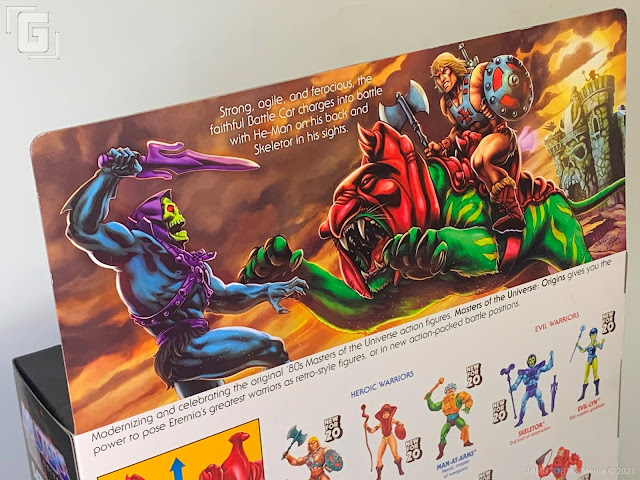 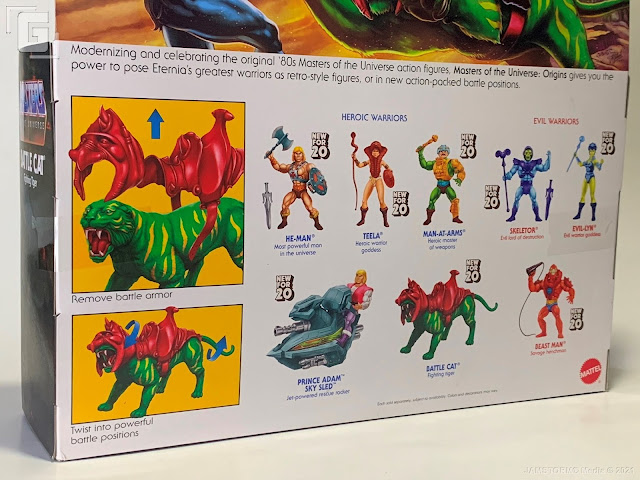 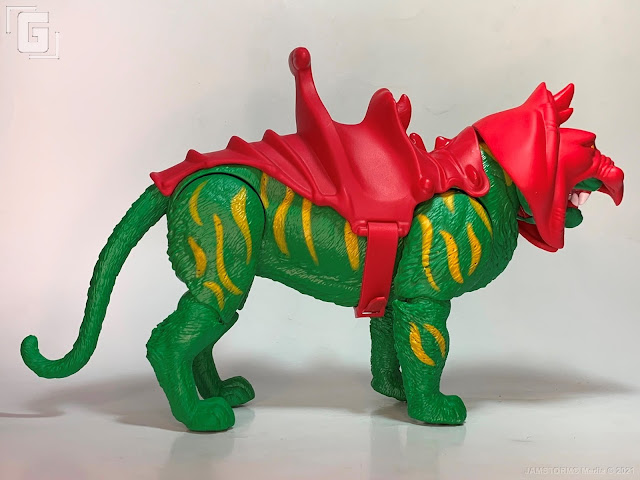 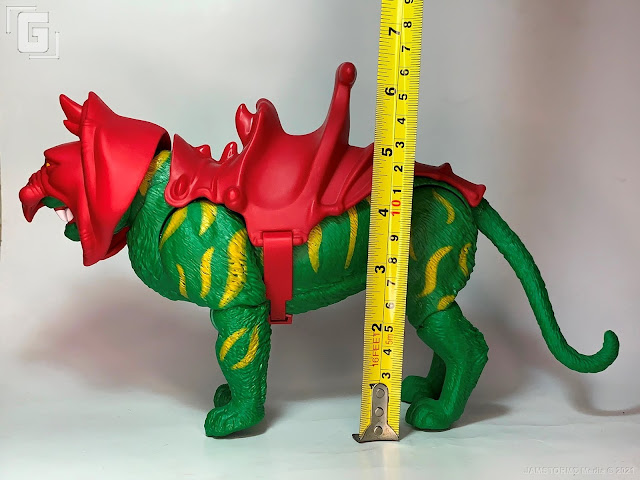 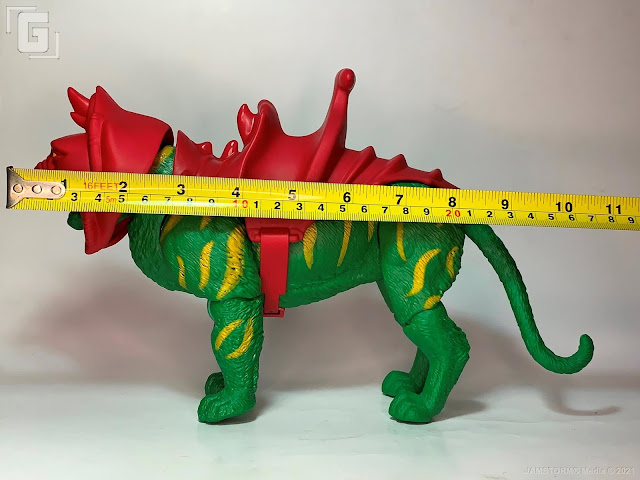 Battle Cat is packaged in a window–style box similar to the vintage edition with modern take of the classic artwork on the flap that sees He-Man with a helmet-less Battle Cat ready to fight the Evil Warriors. The box itself is wrap with Easter eggs that could be a future toy.

At the back of the box the artwork continues with the description os He-Man and Battle Cat face off with Skeletor while at the same time you see the cross-sell art featuring most the Wave 1 assortment of figures.

The background for Battle Cat’s interior packaging is blue and you scan ee the product trying to mimic how the beast characters were put in this glorious packaging. The main selling point for boxed MOTU toys is the artwork and the cross-sell art that shows you some interesting Easter eggs. 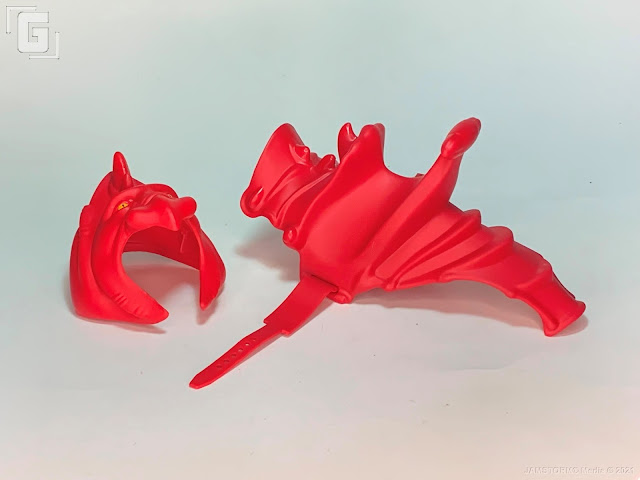 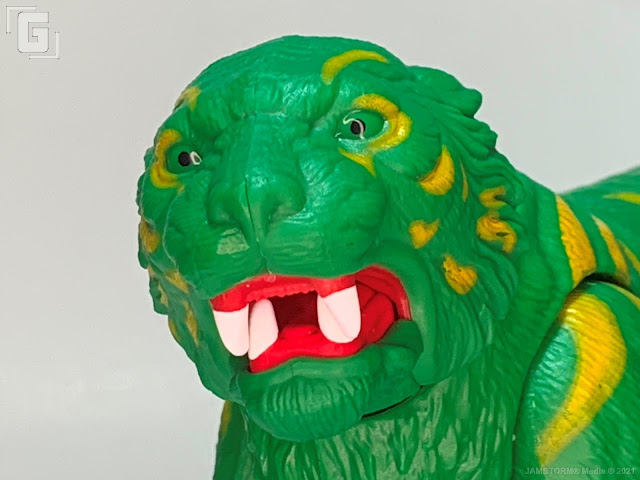 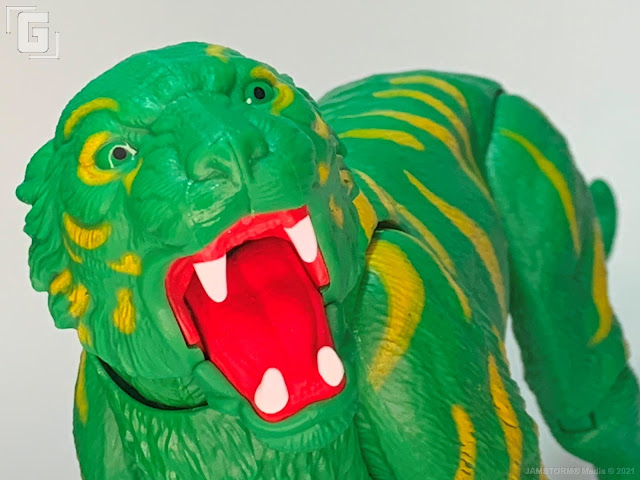 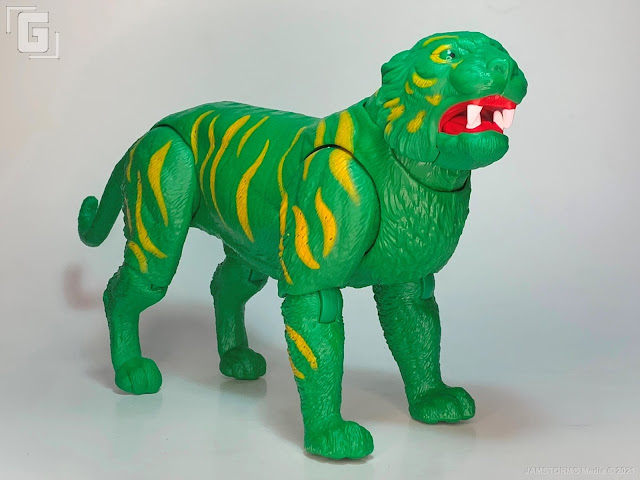 Right out of the box Battle Cat wears his two-piece armor of the mask that has paitned eyes and the saddle, which are both removable. You can see the bright red colors that used to be toned down from the vintage toy as Cringer underneath those accessories is bright green. You can also the measurements on the size of this figure with some heft to it.

Though it doesn’t look like Cringer based from the animation model you can see how they put effort in the details recapturing that classic design that used to be a static statue that was repurposed from the Big Jim toyline that wasn’t even sold in the US. Technically Battle Cat was a generic tiger for the 12-inch scale figure. But that static tiger toy would eventually have a second lease of life as He-Man’s companion in Battle Cat.

It’s impressive enough that this figure is entirely new with articulations, but not perfect as you’d expect with most concerns that it lacked a joint on the front paws to do those action pose that everyone would hope for. But this figure has enough merit to even see as a slight improvement from the vintage version with no articulation at all. 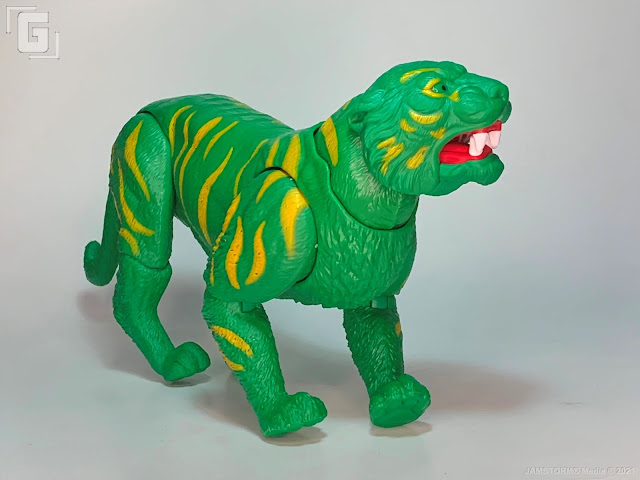 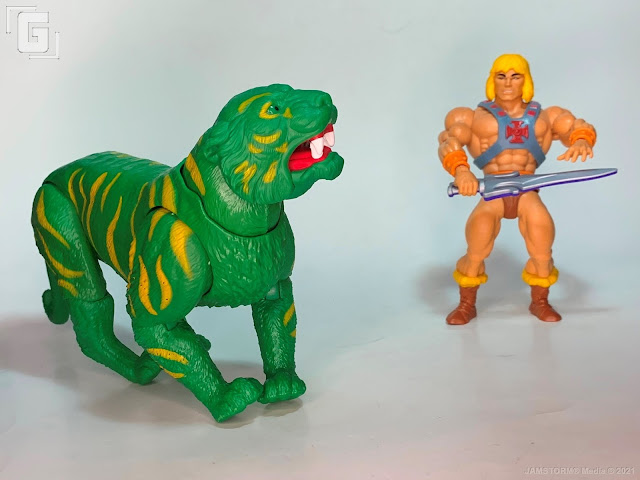 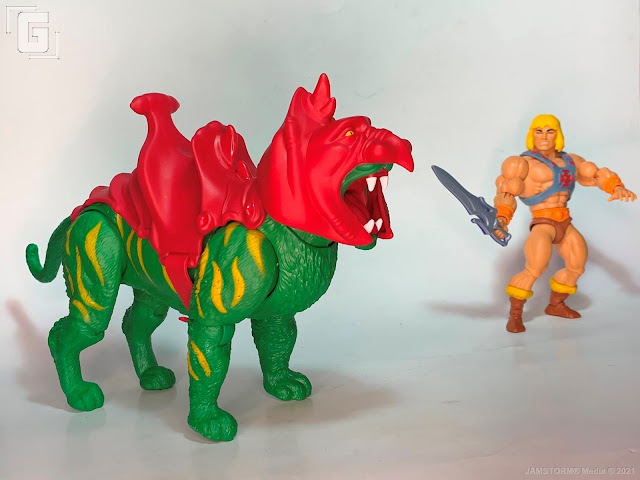 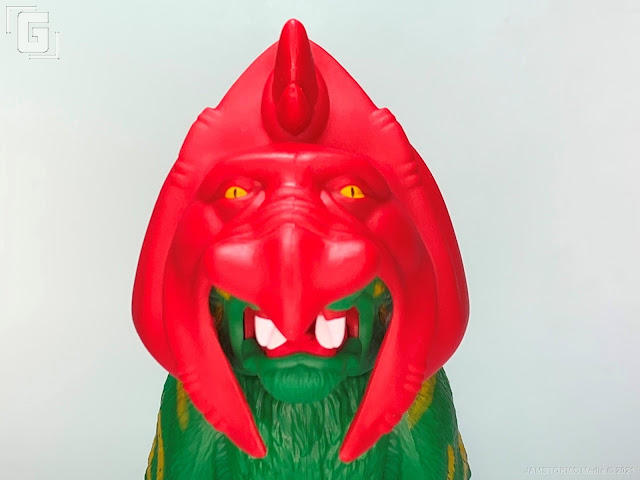 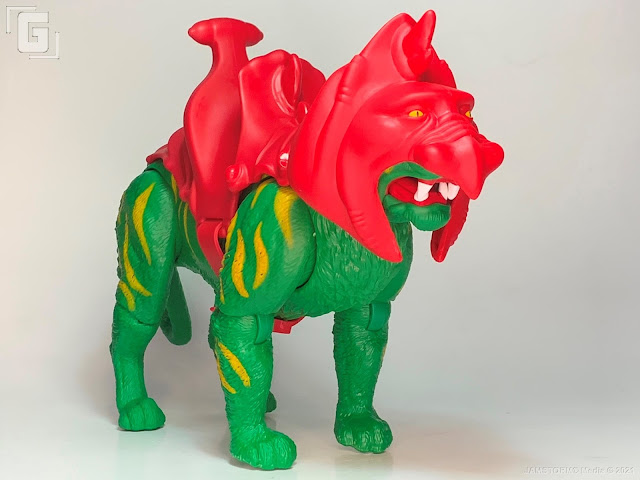 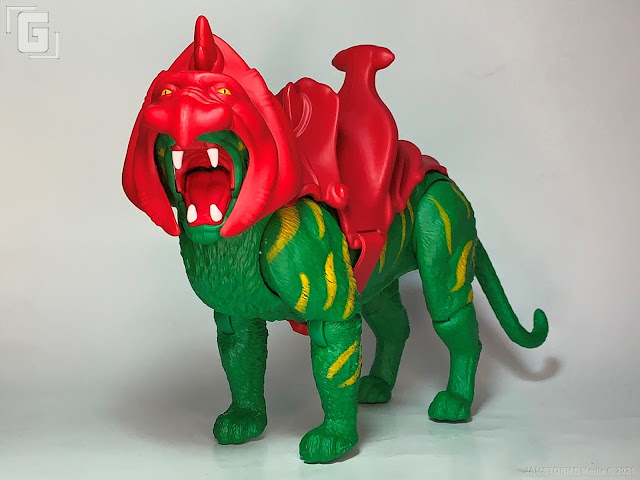 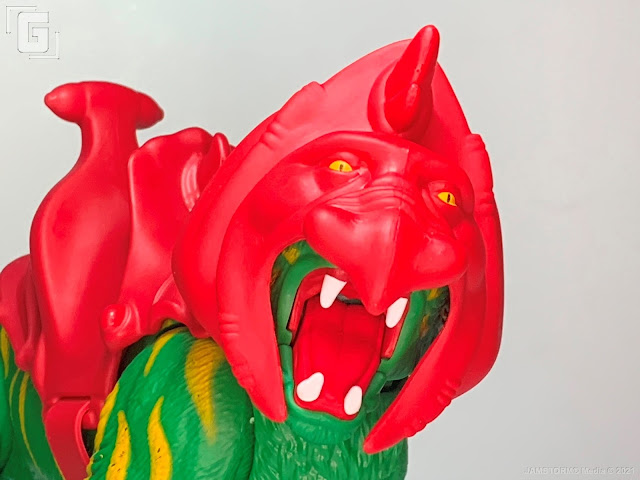 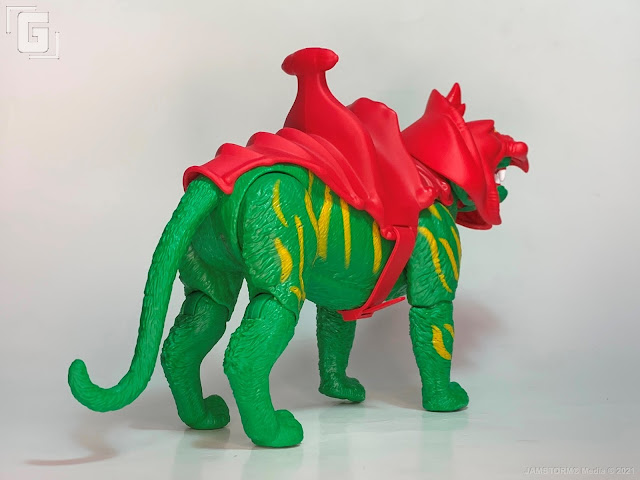 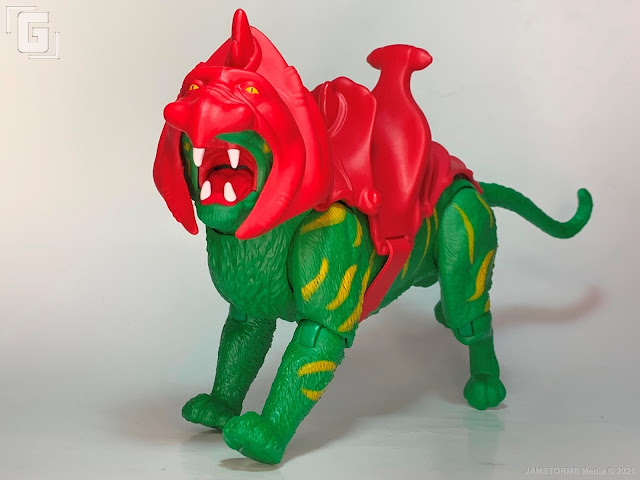 There have been several interpretations of Battle Cat’s transformation, but when Filmation series started showing the cartoon it redefined its mythology. It might not be as detailed as the more expensive MOTU Classics version, but close enough for longtime fans of the series to acquire this and go back to those nostalgic moments seeing the cartoon and appreciating every moment of it.

Definitely, having He-Man is not enough without pairing it with Battle Cat to complete the duo as most collectors have done. It redefine what a cartoon sidekick would be and also how it incorporates that character in toy form why you need Battle Cat on He-Man’s side to turn the tide of conflict with Skeletor and his Evil Warriors.

The size comparison and scale with other MOTU Origins figures says it all, and you can also try to compare having the previous He-Man version from the last retail release to give you that perspective that it can work on this figure too. 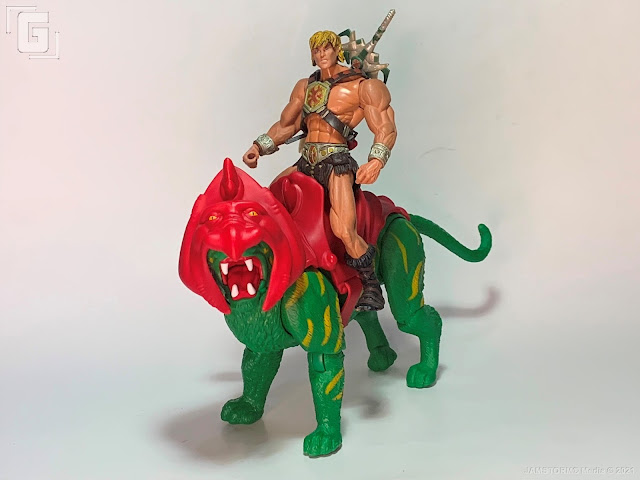 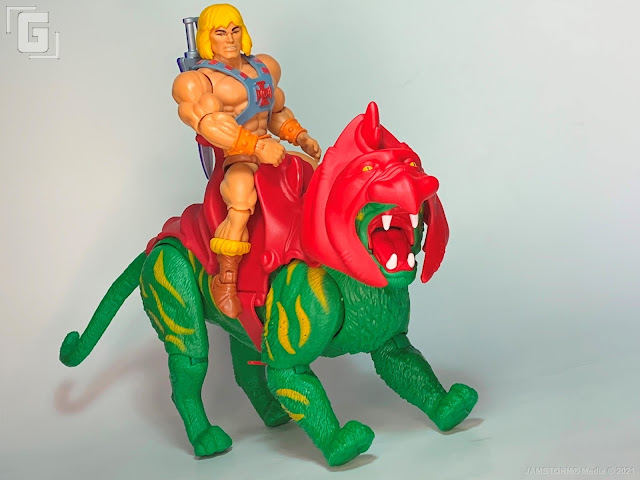 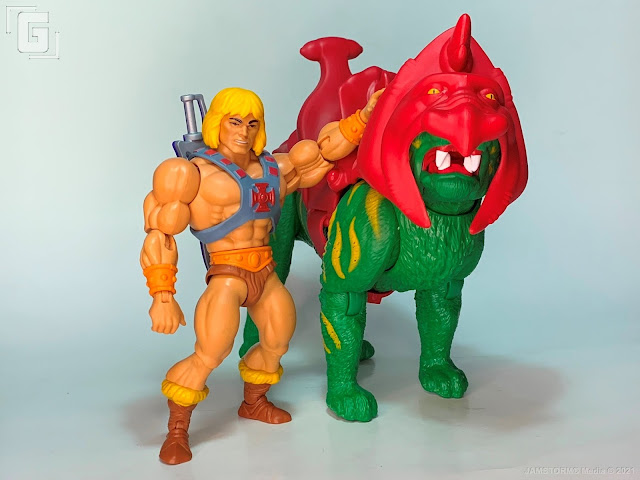 Overall Battle Cat checks all the boxes for any fan or collector of the franchise that should get this figure. It is one of the uncommon characters in the MOTU Origins range of characters that you may find on other retail not getting He-Man or vice versa. The two figures are inseparable and just having these two already completes what you really need in your collection.

This figure may not be perfect not having extra articulation on the paws to do some serious action pose it is an essential character to compliment He-Man as they are the ones most kids grew up not having in their childhood. It is unfortunate Mattel didn’t take advantage having both packaged together just like the vintage toys, but it is enough to give collectors and fans the chance to get both of these characters. 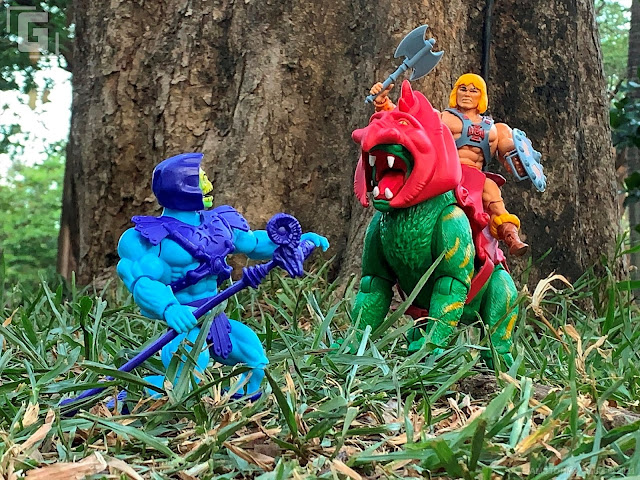 Battle Cat is part of the first wave of Beast and Vehicles for Masters of the Universe Origins from Mattel, which is distributed in the Philippines by Richwell Global Inc retailed at ₱ 1,499.75 (**$ 40.58 AUD | $ 30.54 USD) that was acquired at Ollie & Co Glorietta. For more about MOTU Origins and the store that carry this toyline follow them on their social media via Facebook!